I took this shot at the Okefenokee Swamp in Southern Georgia. There are three entrances to the swamp and I used the Folkston entrance, which is a National Wildlife Refuge run by US Fish and Wildlife. The swamp is a great place to go for wildlife photography and one of the nicer features to the park is that it’s a very quite place as far as people are concerned. The spring time can be brutal with mosquitos and yellow flies so you need to lather well with DEET to refrain from needing a blood transfusion.

Eastern Screech Owls like to take over woodpecker nests that have been dug out over the years in pine trees, which are the main species of tree at this swamp. Fish and wildlife also paint a white ring around the base of a tree that has active nests in order to avoid when conducting controlled burns. Screech owls can range in height anywhere from 8-10 inches, so you have to have a sharp eye to find these little birds of prey.

I arrived at the swamp at around 6 A.M. I already knew the location of this nest and was hoping that today was the day. After hiking in a short distance with my rig set up and ready to go, I spotted the owl perched up right in front of the nest. I couldn’t believe my luck. Slowly and quietly, I prepared for the shot. I managed to get about twenty shots before the owl decided to retreat to inside the nest, and he remained there for almost 45 minutes before slowly starting to poke his head back out. Finally, after about an hour, it was standing proudly back on it’s perch. Unfortunately, I was set up on a hiking trail and every now and again people would pass and that owl would return back into the nest, and we would start the procedure once again.

I spent around six hours there that morning, and enjoyed every second. I had no idea that there were three young owlets inside the nest until a week later, when I got to photograph them also.

I grew up in Scotland and had an amazing grandfather that taught me all about wildlife, buying me books and going on many nature walks, he instilled in me the importance of respect and ethics for all animals. He made me the man I am today. I emigrated to the States in my early 20's and now had a huge backyard to play in. I combined my love of camping and hiking to photography and began to travel and explore our beautiful land. Photography is not my full time profession but on the weekend and vacation i travel from the swamps of the Okefenokee in Georgia to the last frontier of Alaska experiencing what each state has to offer. I have had the great honor of having my work published in National Geographic, Smithsonian Museum and Outdoor Photographer to name a few along with a feature on Neil degrasse Tyson's show Cosmos. 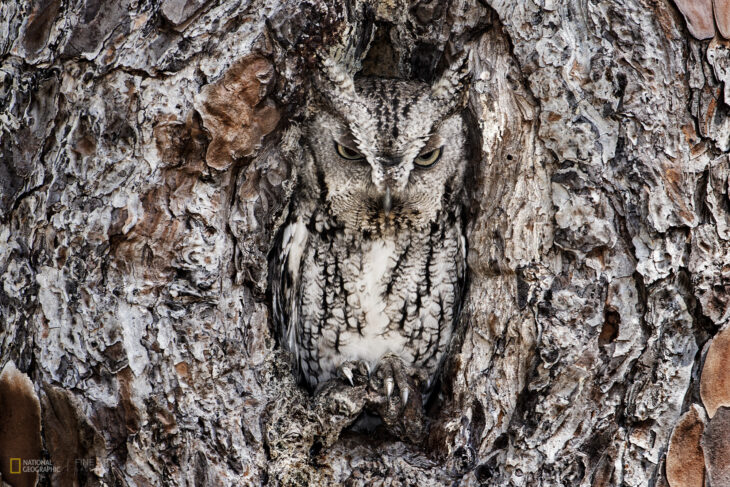