Lightning over the Grand Canyon, Arizona, 2013

Driving to the Grand Canyon one afternoon to capture the sunset with my wife and a student, I decided to stay until after dark as it was during monsoon season. I thought we might get lucky as there had been lightning off and on for weeks where we live in Sedona, so I was praying that we might get lucky.

Although they wanted to leave, somehow in my gut, I had a feeling it might pay off if we stayed. It paid off big time! After about an hour and a half of waiting, and driving to different viewpoints, I ended up at one of my favorites, Moran Point. While we sat there in pitch black, at the fence, all of a sudden the sky erupted with monstrous lightning bolts, lighting up the entire Canyon. It was a moment that is etched in my mind forever.

I screamed to both of them, “get your cameras… this is it!,” as it was one of the most exciting moments of my life as a photographer. I helped them set up their focus and settings in the dark and we started shooting and didn’t stop for about two hours.

It was one of the most dazzling lightning storms I had ever witnessed and I could not stop smiling & screaming for two hours! I knew I was going to capture something very powerful as this was a shot I had dreamed about and knew that I was finally capturing! It has been published all of the world and I was very happy that National Geographic used it for a double page spread in the Visions of Earth section, my favorite part of the magazine! 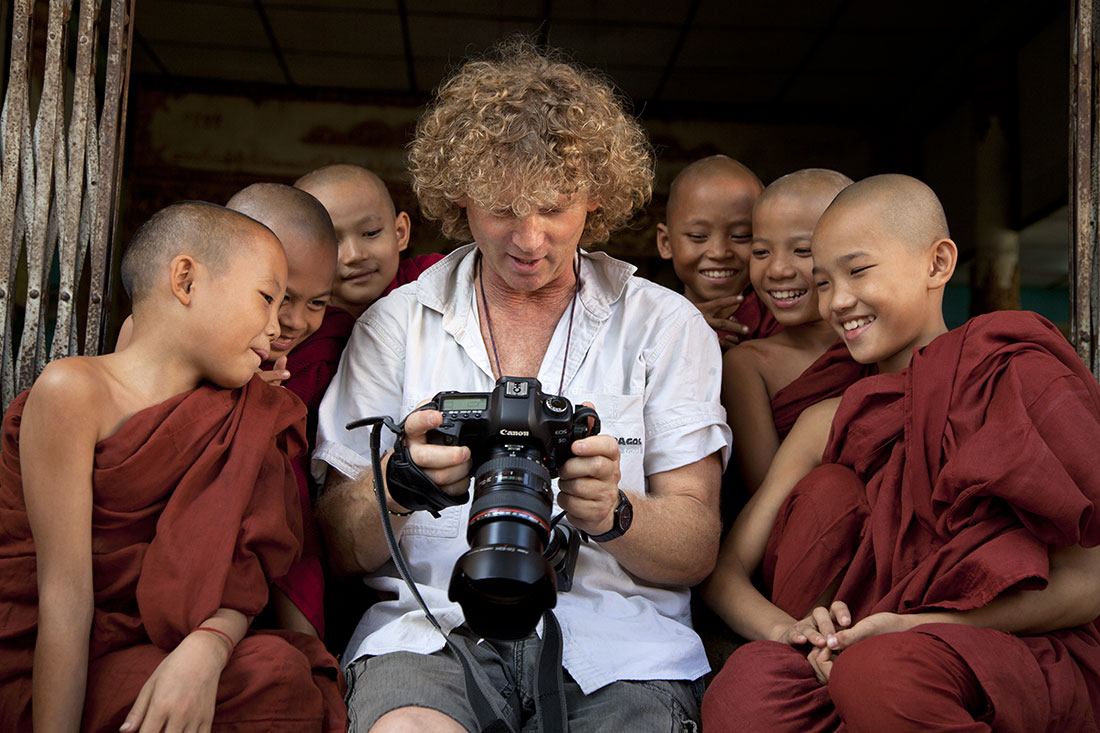 Scott’s love for travel and photography collided at a young age & have taken him to the corners of the world to capture the beauty and intrigue that this world has to offer. And from a young age, in his darkroom, under the safelights, smelling chemicals and listening to music, he lost all track of time watching his images come to life.

Although he has been using Photoshop since the beginning, it was the countless hours in the darkroom that made him fall in love with photography. He agrees with Einstein’s quote that “Imagination is more important than knowledge” as he says that his photographs lets his imagination come to life.

Scott has taught photography at many schools across the US including UCLA, where he won Instructor of the year for Photography and Photoshop. He also leads photography workshops all across the world and the United States. His coffee table book, Passage to Burma, showcases his travels since 2001 to his favorite country on earth.

From the faces of Burma, helicopters over New York City, the history and beauty of Europe, the eye candy of India, the wonders of the Galapagos Islands or the dazzling Milky Way and night sky around the globe, his images can be seen worldwide.

From Microsoft, Time, Newsweek, National Geographic, Outdoor Photographer, Conde Nast Traveler, Travel and Leisure, In flight magazines, Wall Street Journal, CNN and ABC News to greeting cards, calendars, puzzles, book covers and bill boards, his images are used internationally. They are in countless collections from top 5 star resorts to major hospitals & department stores and are also on permanent display in the United Nations. Scott lives with his wife in the picturesque town of Sedona, Arizona.